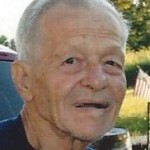 Alexander Jubinski Sr.,88, of Mill City passed away at his home surrounded by his family Sat. evening. Alexander was born Sept. 26, 1926 in Simpson, Pa. and he was the son of the late Steven and Theodosia Priblo Jubinski. He attended the Falls-Overfield School until he enlisted in the U.S. Navy. After the Navy he married the former Lucy Clark on Feb. 19, 1949 and they celebrated 66 years together. Alexander worked as a delivery driver for the Hawk Oil Company for many years.
Alexander enjoyed playing with his grandchildren, going to polkas, farming, and spending time outside in his garden.
In addition to his parents he is preceded in death by; his son Chris Jubinski, a great grandson Xavier Gorham, and a brother Andrew Jubinski.
In addition to his wife, Lucy, he is survived by his daughter Sharon Georgetti of Mill City, son Alexander Jr. and wife Lynn of Dalton, sister Dorothy Simons of N.C., Anna Skovran of N.C., brother Steven Jubinski of Mill City and six grandchildren; Tina and husband Victor Gorham of Lake Winola, Tim, Alexander III,Cody, Michaellien, and Sami, two Great Grandchildren; Rylinn and Sophia, and many nieces and nephews.

Funeral services will be held at 11am Tuesday March 3rd from the Harding- Litwin Funeral Home 123 W. Tioga St. Tunkhannock with Pastor Rick Womer of the Tunkhannock Assembly of God officiating. Interment will be at the Mountain View Cemetery, Harding at a later date. In lieu of flowers, memorial contributions may be made to the Griffin Pond Animal Shelter 967 Griffin Pond Rd South Abington Twp, PA 18411. For online condolences or directions visit www.aplitwinfuneralhomes.com .