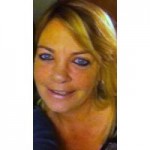 Amy T. Kosek Manning, 49, of Tunkhannock passed away at the Celtic Hospice Care Wilkes-Barre, Pa. Sunday morning after a year and a half battle with cancer. She was born in Bristol, Pa. on Aug. 20, 1965 she was the daughter of Carol Anne Remley Kosek and George and Shirley Teel Kosek. Amy was a machinist at Pulverman Dallas and enjoyed spending time with her family especially her grandchildren. She is preceded in death by her brother Kevin Kosek and her grandmother Amy Remley In addition to her parents and stepmother Amy is survived her children Richard, Elizabeth, Michael, and Daisey Cook all of Tunkhannock, and a sister Terry Wright of Florida, a brother George A. Kosek of Tunkhannock, stepbrothers Eric Roberts of Garland Texas and also Preston Quick of Woodbridge Va and 8 grandchildren. A memorial service will be held at 7pm on Thursday Oct. 9, at the Harding-Litwin Funeral Home 123 W. Tioga St. Tunkhannock with Ernie King Officiating. Friends may call from 6pm until the time of the service. Interment will take place at the Camptown Cemetery at the convenience of the family. In lieu of flowers memorial contributions may be made to the Celtic Health Care 25 Church St. Wilkes-Barre, Pa. 18702 or the Wyoming County Cancer Society 8 Ironwood St. Tunkhannock, Pa. 18657. www.aplitwinfuneralhomes.com