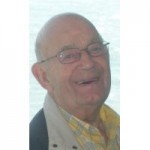 Arthur H. Duddek, 90, of Langsville, Ohio, formerly of Tunkhannock, PA, went to be with his Lord suddenly on August 13, 2014, at Holzer Medical Center. He was born on March 4, 1924, in Decatur, IL, the son of John and Marie Duddek. In addition to his parents, he was preceded in death by his wife, Betty Harrington Duddek; brothers Bill, Alfred, and Fred Duddek; and sisters Gertrude Neuhoff and Helen Smith. He was a veteran of World War II, serving in the Navy in the Pacific. For much of his life he attended the Tunkhannock Pilgrim Holiness Church, and after moving to Ohio in 1999, attended the Danville Holiness Church. His greatest joys were his Savior and his family. He was known for his testimony of love and commitment to the Lord and his consistent walk with God. Anyone who spoke with him was likely to hear of all that God had done for him, and his hope was that many would chose to serve the Lord as well. He is survived by his daughter Faye (Joe) Tillis, of Langsville, OH; son Jeff (Tonya) Duddek of Colorado Springs, CO; grandchildren Anna and Joey Tillis, and Emilee and Jeffrey Duddek, Jr.; brother John Duddek of Allentown, PA; sisters Mary and Ruth, both of Tunkhannock, PA; sister-in-law Norma Duddek of Old Forge, PA; and many family members and friends. Visitation will be from 5-8 pm on Saturday, August 16, at the Danville Holiness Church on Rt. 325 in Danville. Arrangements handled by Birchfield Funeral Home, Rutland, OH. Other services are at 11 am, Monday, August 18, at the Tunkhannock Pilgrim Holiness Church, Tunkhannock, PA, with visitation from 7-9 pm on Sunday, August 17, at the Harding-Litwin Funeral Home, Tunkhannock, PA. His son Jeff Duddek and Rev. Norman Blowers will conduct the services, with burial to follow at Sunnyside Cemetery, Tunkhannock, PA. In lieu of flowers, the family asks that donations be made to Danville Holiness Church, specified for missions, at 31057 State Route 325, Langsville, OH 45741.