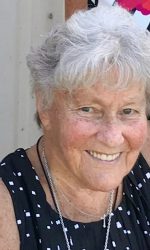 BARBARA A. SNYDER
November 3, 2022
Barbara A. Snyder, formerly Barbara A. Zeiders, 84 of Factoryville, died Thursday, November 3, 2022 at the Gardens in Tunkhannock
She was born in Harrisburg, daughter of the late Roy V. Zeiders, Sr. and Elizabeth Sherk.
Barb retired from Endicott Johnson Shoe Factory in Tunkhannock.
She was a member of the Lake Winola United Methodist Church.
Barb’s greatest love was her family. She enjoyed gardening, reading, crocheting, puzzles and playing games on her tablet.
She was preceded in death by her husband, Lawrence H. Snyder, Sr. of 55 yrs. on August 1, 2011; and a son, Lawrence H. (Sandra) Snyder, Jr. of Factoryville, who passed away on June 1, 2022, and a daughter-in-law Connie Snyder on Oct. 22, 2017. Two sisters, Sandra L. Wolfe and Nancy Ditzel; and a brother, Roy V. Zeiders, Jr., also preceded her in death.

Interment will be in the Forkston Cemetery at a later date.