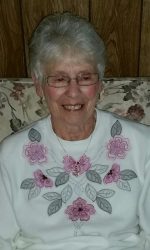 Barbara “Bobbie” L. Huff, 91, of Tunkhannock died Tuesday morning Sept. 15, 2020 at Allied Services Hospice Center, Scranton.  She was born in Noxen on July 30, 1929; the daughter of the late Clarence and Elizabeth Newell Dailey.

Bobbie spent the majority of her life as a devoted mother.  She also was a Telephone operator, Tunkhannock School District cafeteria worker, and she worked at the Wyoming County Courthouse as an operator. She loved working in her yard, spending time with her grandchildren and watching them play sports, and watching auto racing.

Barbara was preceded in death by her husband William Huff who died in 1998 a daughter Lynda Huff Dyson, sister Ramona Harvatt and a brother Roy Dailey.

Funeral Service will be Sunday Sept. 20 at 7pm from the Harding-Litwin Funeral Home123W. Tioga St. Tunkhannock with Ernie King conducting the service. Friends may call at the funeral home on Sunday from 5pm to 7pm. A graveside Service will be held on Monday at 11am at Sunnyside Cemetery. For online condolences or directions visit www.aplitwinfuneralhomes.com.