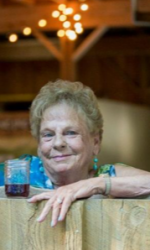 Barbara (Scott) Harvey, 86, of Tunkhannock, passed away at her home on October 27, 2020, surrounded by her loving family and best friends.  She was born on February 26, 1934, in Hop Bottom, PA and was the daughter of the late William and Dorothy (Carpenter) Scott.

Barbara worked as a cook at the Tunkhannock High School and spent her summers as a cook at Camp St. Andrew in Lemon, both for 28 years.  Barbara enjoyed life, she loved music, dancing and making people laugh.  Barbara’s greatest joy was her family, her children, grandchildren and great grandchildren. She gave so much and was loved by so many.

Sincere and heartfelt thanks go to her granddaughter Becca, who was her special angel and nurse.  She brought us all so much comfort and confidence in the care she gave to our mother, grandmother, sister and friend.

The family would also like to thank the nurses and staff of the Hospice of The Scared Heart for their compassionate care for Barbara.

In lieu of flowers, memorial contributions may be made in memory of Barbara to the Hospice of the Sacred Heart, 600 Baltimore Drive Wilkes Barre, PA 18702.