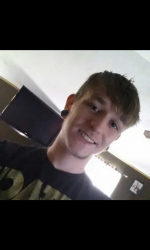 Brandon Matthew Dean Moon, 19, of Tunkhannock, died June 1st, 2016. He was born December 9th, 1996. He is the son of Michael and Angela Marie Moon Moyer. Brandon went to Tunkhannock and was part of the class of 2015.

Brandon had many hobbies throughout his life. He love fishing, swimming and being in nature. He was most passionate about his friends and family and loved music. He was a kind, loving and generous person who will be deeply missed.

He was preceded in death by maternal great grandfather Bryce Jones.

In addition to his parents he is survived by a sister Mikela Moyer. Grandparents Robin and Dave Dorman of Montrose, Clyde and Mary Moyer of Tunkhannock, great grandma Shirley Jones of Laceyville. He is also survived by several aunts, uncles and cousins.