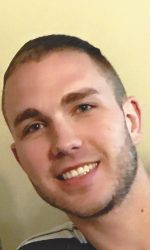 Brandon William Burleson, 32, formerly of Tunkhannock passed away at his residence in Las Vegas, Nevada on Wednesday, May 22, 2019. Born in Scranton, Pa. on March 27, 1987, he was the son of Hal and Lisa Wynd Burleson of Tunkhannock.

Brandon graduated from Tunkhannock Area High School, a member of the class of 2005. He had a great love for music at a very early age. He could pick up an instrument and in a short time play it. He composed his own songs and music, adding mixes and beats to create a sound of his own. His voice, soft, full of love and emotion. Brandon’s dream was that one day, he’d have his music produced and sold. Brandon had great love for his cats, Zira and Batman. He loved the outdoors, hiking, and having spent many years loving life at Lake Carey before moving to Nevada.
Brandon is preceded in death by his paternal grandparents, Allen and Doris Burleson, and his
maternal grandparents, William and Jane Wynd, all of Tunkhannock. Cousins, William Louis Wynd and Tracey Robert Price also preceded him in death.
In addition to his parents, Brandon is survived by his sister, Bridget Blumenauer and husband Don, and their children, Brylie Jane and Deegan, Towanda, Pa.
Uncle, Robert Wynd (Connie) Aunts, Rebecca Forte (James), Linda Price (Rich) all of Tunkhannock,  Lori Rehm of Fombell, Pa., and ten cousins.
In loving memory of Brandon’s life services will be held on Thursday, May 30, 2019 from the Harding Litwin Funeral home, 123 West Tioga Street, Tunkhannock. Friends may pay their respects beginning at 10:00 AM until the time of service at noon. Interment will follow at Sunnyside Cemetery, Tunkhannock, Pa.
In lieu of flowers, and in memory of Brandon, donations may be sent to, The Meshoppen Cat
Rescue, 355 Heaven Bound Lane, Meshoppen, Pa 18630
For online condolences or for directions, visit: www.aplitwinfuneralhomes.com