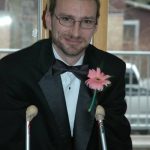 Brian Hayes, 47, of Springville died June 8, 2017.  He was born in East Orange, NJ. on Dec. 17, 1969 and he was the son of the late former Marie O’Rouke and Raymond Hayes.  Brian was a graduate of the Columbia High School in Maplewood, NJ, and he was a night shift supervisor at the Weis Market.  Brian Married the former Tina Marie Rinaldi on Apr. 4, 2009

Brian enjoyed spending time with his family and he was a loving son, husband, and father that would do anything for his family.

In addition to his mother Brian is preceded in death by his brother David Walsh.

In addition to his wife and father, Brian is survived by his daughter Caitlyn Hayes of Springville and step daughter Rachel Rinaldi. Also his Brothers Kevin Hayes, James and Richard Walsh and sisters Theresa Jones, Doreen Walsh, and Linda DeMatteo .

A celebration of Brian’s life will be held Sat. at 11 am from the Tunkhannock Assembly of God Church 181 Bridge St. Tunkhannock with Pastor Rick Womer officiating.  Friends and family may pay their respects from 10am until the time of the service.  Interment will be private at the convenience of the family.  For online condolence or direction visit www.aplitwinfuneralhomes.com.