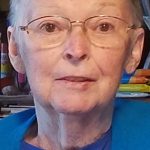 Share Print
Brigitte Hoff, 72, of Tunkhannock, passed away peacefully at home on Oct. 11, 2019 after a long, protracted battle with cancer. Winning many battles along her 18 year journey, she will be remembered for her determination and will to fight. She is at rest now and deservedly, pain free.
Brigitte was born on December 4, 1946 in Geesthacht, Germany to the late Werner Max Herman Knaack (d.November 14, 1989) and Hildegard Eva Scheller Knaack (d.March 22, 2010). She sailed past the Statue of Liberty and Ellis Island on February 2, 1955, and legally entered the United States as a sponsored immigrant, remaining proud of her German heritage and legal immigrant status throughout her life. Growing up in Warminster, Pa., she graduated from William Tennent H.S. in 1965 and married her husband, David, on September 14, 1968. She held positions at Univac Corp. and Phila. National Bank prior to relocating to Tunkhannock in June,1972 (just after the Great Flood). She had two sons who graduated from Tunkhannock H.S. and still remain in the area. She took great comfort in their daily visits these past three years as her illness progressed.
Brigitte was employed, along with her husband, at Fisher Stoves in Factoryville, Pa., where she managed the showroom for 35 years.  She mastered the evolving technologies in the hearth industry, from primitive wood stoves in the ’70s up through the hi tech EPA products available today. Over the years, this knowledge allowed her to serve thousands of customers, many of whom referred to her as “The Stove Lady”.
She enjoyed many interests including reading a good novel, watching her favorite soap opera, listening to 40’s music, attending car cruises and NASCAR races, a good meal out, and an occasional visit to a gaming establishment. Brigitte looked forward to a glass of fermented grapes and was a frequent visitor to the Finger Lakes Region and Watkins Glen. She liked Red Cat the best, but always checked out her options when visiting. She was a fan of the Mouse and enjoyed everything Mickey. She looked forward  to family celebrations and holiday dinners at her log cabin on the hill and was happy to share the cooking responsibilities with her husband. Most of all, she enjoyed her grandchildren and cherished every moment she was able to spend with them. She considered them to be the greatest of all treasures.
For years, she started her work day with a bite at the Double D Restaurant where she enjoyed the food and camaraderie. She was a frequent cruiser and sailed on many ships to the Caribbean and Alaska, the last being a sail to the Panama Canal on her favorite cruise line, Royal Caribbean. She made many trips to Pearce, Az., to visit her in-laws, Hal and Ginny, who exposed her to the American West.  Brigitte made many treasured visits to “the sweetest place on earth” where she enjoyed the company of “Best Buds”, Barry and Carolynne. Infrequent, cherished trips away from home during the past two years included a trip to Maine where good friends Stephanie and Tim acted as tour guides on a memorable sojourn. This was followed by a Fall foliage trip through upper New York and Vermont with her husband where, upon return, Brigitte commented that “the leaves are more impressive in Tunkhannock”. In September 2018, on her last trip away from home, she and David celebrated their 50th wedding anniversary by making hot laps at Watkins Glen International Racetrack in their Chevrolet SSR along with 40 other SSR enthusiasts.
Besides her husband, David, she is survived by son Jeffrey Harold and wife Sacha, granddaughters Erin and Emily Weaver, son Jason David and significant other Jenn Higgins and her children Avery and Emily, and grandsons David Anthony and Michael Werner, all of Tunkhannock. She is also survived by her sister Bar’bel Sabine Knaack Tinsman and husband William of Glenside, Pa., cousins Karin and Christa in Germany, and numerous nieces and nephews.
She was predeceased by her parents and sister, Gabrielle Hildegard Knaack Brady, and brother, Uwe Ralph Knaack.
At Brigitte’s request, there will be no services. Interment will be at a later date in Sunnyside Cemetery, Tunkhannock.
Arrangements and care provided by the Harding-Litwin Funeral Home, 123 West Tioga St., Tunkhannock.
Contributions can be made in Brigitte’s memory, to the Tunkhannock Kiwanis Club, Tunkhannock, Pa. 18657. To share memories or to extend condolences, please visit wwwaplitwinfuneralhomes.com.