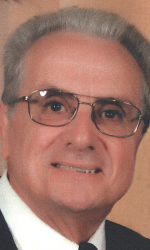 A viewing will be held Sunday, December 19th, 2021 from 12-2pm at Litwin’s Funeral Home in Factoryville. A Blessing by Fr. Arbogaste Satoun will begin at 2pm.

Carl “Poppy” Widmer, 79, of Fleetville passed away in the early afternoon hours on December 14th, 2021, surrounded by loved ones.

He was born to George Sr. and Marie Fritze in Newark, New Jersey on June 6th, 1942. The youngest of five, he is preceded in death by his brothers George Jr. and Richard, and survived by his sisters Betty Moser of Iselin, New Jersey and Anna Clarke of Las Vegas, Nevada.

Carl was a sheet metal mechanic in the industry for 45 years and was an expert in his craft, retiring in 2004.

He married the love of his life, Constance Kolesar, on May 8th, 1965. They celebrated their Golden Anniversary in 2015 and were married for 56 years. The pair lived in Colonia, NJ for 43 years with their loyal German Shepard Snowy and three children; Chuck of Brick, New Jersey, Christine Petrilak and her husband John of Fleetville, Pennsylvania, and Claudine Huie and her husband Steven of Queens, New York.

Carl was always known to crack a joke. He was a movie and tv connoisseur, had incredible luck in the casino, was skilled at billiards, played bingo whenever he could, and enjoyed going on cruise vacations. Most of all, he enjoyed spending quality time with his family.

He was beloved by four grandchildren, Danielle, Kyle, Angelina, and Zachary and was adored by his grand-puppies Shadow and Chicken.

A viewing will be held Sunday, December 19th, 2021 from 12-2pm at Litwin’s Funeral Home in Factoryville. A Blessing by Fr. Arbogaste Satoun will begin at 2pm.

Carl will be dearly missed, but never forgotten. We love you, Poppy.