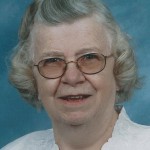 She was born in Lemon Township in Wyoming County on the family farm. Her parents were Robert Gorman and Elsie Miller Gorman. Her sister was the late Margery Zumbrun (Henry) of York, PA and her brother is Herbert Gorman (Janie) of Graham, WA.

Carol attended the Pennsylvania State University graduating with a degree in Home Economics in 1944. Prior to her marriage she taught in Fleetville and Great Bend and earned her permanent teaching certificate.

Carol was predeceased by her husband in 1972.

Carol was an avid vegetable, fruit and flower gardener and passed that love on to her children and grandchildren.

In the community she volunteered as a Girl Scout and 4-H leader, Meals on Wheels delivery person and Tyler Hospital hospitality shop worker.

She was raised in the Methodist Church and was active in many areas of ministry including the nursery and Sunday school. In her later years at Tunkhannock United Methodist she used her organizational skills in leading a group that made sleeping bags for the homeless, helping to run the annual jumble sale and keeping the church kitchen ready for the next event.

Her family wishes to express their heartfelt thanks to the staffs of the Tunkhannock Methodist Manor, Golden Living Center Tunkhannock and AseraCare Hospice.

A funeral service will be held at the Tunkhannock United Methodist Church 4 Church St. Tunkhannock, on Sat. March 21, at 10am with Ernie King officiating.

Friends may call from 9am until the time of the service. Interment to follow at Sunnyside Cemetery.