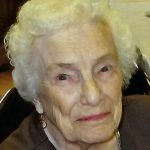 Charlotte Annette “Montross” Hadsall, 101, of Tunkhannock passed away at The Gardens of Tunkhannock on Dec. 24, 2019.  She was born in Tunkhannock on Oct. 1, 1918 and she was the daughter of the late Howard and Mary Foster Sands.  Charlotte was married to the late Emerson Montross and Glenn Hadsall.

In addition to her parents and husbands Charlotte is preceded in death by a daughter Lucy Montross and brothers Clifford Sands, Alfie Sands, Howard Sands, Jr., and Walter Miner

A memorial service will be held Jan. 4, 2020 at 11am from the Eatonville United Methodist Church 44 Church Rd. Tunkhannock, Pa. 18657 with Pastor Robin Fillmore officiating. A visitation will be held from 9am until the time of the service. Interment will be at the Sunnyside Cemetery.  In lieu of flowers memorial contributions may be made to the Church.  For online condolence or direction visit www.aplitwinfuneralhomes.com