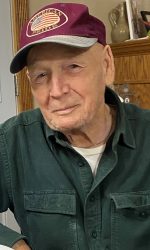 Clifford Robets, Sr., 85 of Tunkhannock passed away at the River View Nursing Home in Wilkes Barre PA on November 21, 2021.
He was born in Tunkhannock on August 15, 1936, and was the son of the Late Leslie and Louisa Wall Robets. His wife of fifty-six years was the late Linda Platt.
He is preceded in death by his parents, wife and siblings Leslie Robets Jr., Clarence (Pete) Robets, Grace Squier, Jean Setzer and Merton Robets
Cliff served in the United States Marine Corp and worked as a Boilermaker for many years until his retirement. He was a member of Local 13.
He had many friends and would frequently gift them with his specialty, homemade cinnamon rolls. If someone needed a ride to a medical appointment, shopping or a small home repair he would be there to help, day or night. He thoroughly enjoyed his Wednesday evenings at the Moose Lodge with his best buddy Bob Ross as they tried to win shuffleboard matches against Debbie and Alyce.
In addition to the Moose he was also a member of the Black Walnut American Legion and Kiwanis.
He is survived by his children; Michelle Thomas (Stephen), Frederick Robets, Clifford Robets Jr., all of Tunkhannock Shane Robets (Ronda Macedonio) of Providence Village Texas, and Jason Robets (Elicia) of Ephrata PA. as well as thirteen grandchildren; Nathan Thomas (Haydee), Stephanie Matthews (Shawn Calkins), Rebecca Jurista (Nick), Sarah Robets, Adam Robets (Cassie Martz), Preston Robets (Rachel), Megan Shea, Kristin Kayser (Drew), Jennifer Robets, Lindsey Robets, Monica Reich, Dillon Robets and Julia Robets. His great-grandchildren, Nick Matthews, Lucy, Jack and Erik Jurista, Jonathan and Nicole Thomas, Gabriel, Nolan, Lincoln and Daxton Robets, Drake and Piper Kayser, Savannah and Scarlet Robets and grandchildren of his heart Peyton Garey and Natalia Sirmons, as well as several nieces and nephews.
Our family would like to thank Patty and Connie, Dad’s caregivers over this past year, for their help and friendship as well as Lester Puterbaugh of Meshoppen Pizza for always having Dad’s plate of pepperoni ready.
A memorial service will be held December 1, at 12:00 noon from the Tunkhannock Assembly of God Church at 181 Bridge Street, Tunkhannock with Pastor Richard Womer officiating. A visitation will be held at the church from 10:00 am until the time of the service. Interment will follow at the Sunnyside Cemetery Tunkhannock. For online condolences or directions visit www.aplitwinfuneralhomes.com.  Donations in memory of Cliff may be made to the Alzheimer’s Association https://www.alz.org/ or the True Friends Animal Welfare https://www.truefriendsawc.com/ways-to-help/donate/