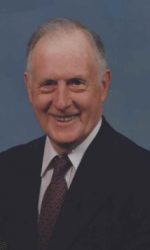 David was the son of Mr. Clarence Blewett and Mildred (Atkinson) Blewett of La Plume, PA. He was one of five children, two brothers William Blewett (Marilyn) and Charles (Shirley) Blewett, and two sisters Peg (Abbott) Blewett and Betsy Blewett.

He was a graduate of Dalton High School in 1942. He joined the US Army in May 1944 and served overseas during WWII. He was wounded and rehabbed in Italy. On his recovery the US Army transferred him to France where he was wounded again and captured in December 1944. He was repatriated in May 1945 and discharged at the rank of Tech Sgt. later that year. The US Army awarded him two Purple Hearts and other service-related medals.

On his return to Dalton, he married the love of his life, Shirley (Sally) Strom Blewett in 1947 and began a thirty-year career with the US Postal Service. Following his retirement, he & Sally moved to their dream home and gentleman farm outside of East Lemon, PA. He was a member of the United Methodist Church of Tunkhannock. Dave is predeceased by his wife, Sally in 2010 and his son, Timothy in 2022.

Dave was a kind, gentle, humble man with a keen sense of humor. His family, faith, and friends were a cherished part of his world.

Funeral services for David along with his son Timothy Blewett will be held Friday Oct. 21st at 12noon with Ernie King officiating from the Harding-Litwin Funeral Home 123 W. Tioga St.  A viewing will be held from 10am until 12noon for David and Timothy at the funeral home.  Interment will follow at the Fairlawn Cemetery Dalton.  For online condolences or directions visit www.aplitwinfuneralhomes.com.