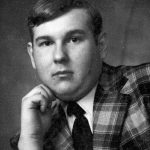 David Robert Kroptavich, 55, of Tunkhannock passed away at his home on Dec. 7th.  David was born in Kingston on March 24, 1964 and he was the son of the late Joseph and Ann Azarsky Kroptavich.  He was a graduate of Tunkhannock High School and received his bachelor’s in business administration from Mansfield University.

David was an avid car racing fan and attended many stock car races.  He loved to watch his Raiders during football season and attend the local high school football games. He enjoyed traveling to Las Vegas, flea markets, and spending time with his friends.

In addition to his parents David is preceded in death by brothers Robert and Joseph Kroptavich Jr. and a niece Jennifer Coviello.

He is survived by a brother Daniel Kroptavich  and a sister Roseann Coviello, niece Danielle and husband Eric McTague, and a great niece Lindsay and great nephew Gabriel McTague all of Tunkhannock.

Funeral services will be held at 7pm Thursday from the Harding-Litwin Funeral Home 123 W. Tioga St. with Pastor Chris Stark of the Rock Church Worship Center officiating.  A viewing will be held from 6 until the time of the service.  Interment will take place at the Pieta Cemetery, Tunkhannock at a later date.  For online condolences or direction visit www.aplitwinfuneralhomes.com