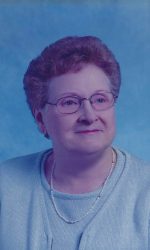 The family will receive relatives and friends on Saturday, October 31, from 10 to 11 a.m. at Harding-Litwin Funeral Home at 123 W. Tioga St, Tunkhannock, PA 18657, with a memorial service at 11 a.m. by the Rev. John Shaffer and Pastor Robin Fillmore. The interment will follow at Sunnyside Cemetery, Tunkhannock.

Doris E. (Harvey) Colbenson, 94, of Tunkhannock, passed away at her home on October 28, 2020, surrounded by her loving family. Dorie and her husband, Robert G. Colbenson, Sr., were married 57 years when he passed away on May 2, 2002. Born on September 20, 1926, in Vosburg, Dorie was the daughter of the late Russell and Frances (Kithcart) Harvey. She graduated from Tunkhannock High School in 1944. Dorie was a life-long Methodist, and most recently, a faithful member of the Evans Falls United Methodist Church.

Dorie worked as a waitress at the Pink Apple Restaurant in Tunkhannock. Her most enjoyable times were working at J&J Drug Store and Henry’s Drug Store, both in Tunkhannock. Dorie was an avid bowler and loved to spend time playing cards with her close friends. Even last week, she was asking for a deck of cards.

Dorie was a devoted wife, mother, grandmother, and great-grandmother. Her greatest joy was her family, and her face would light up every time a child walked in the room. An accomplished cook, Dorie’s table always had room for one more. There are no words to describe the impact she made in so many people’s lives and how much she will be missed.

She is survived by her three beloved children, Robert G. Colbenson Jr., and his wife, Blanche, Tunkhannock; Linda D. Herman and her husband, Elwin, Tunkhannock; and Barbara A. Jamison and her partner, Colleen Carter, Clarks Summit; her grandchildren, William Robert Colbenson Sr., and his wife, Lauren, Tunkhannock; Andrea L. Herman Parry and her husband, Mark, Tunkhannock; and Elizabeth L. Jamison and her fiancé, Matthew Anglin, Philadelphia; her step-grandchildren, Katherine A. Carter, Dunmore, and Margaret R. Carter, Philadelphia; her five great grandchildren, Angela Mae Colbenson, William Robert Colbenson Jr., Annalynn Elizabeth Parry, Eli Robert Parry, and Rosalie Parry, all of Tunkhannock; and the Tom Stone Family, Tunkhannock, who she loved like her own. In addition to her husband and parents, Dorie was preceded in death by her sisters, Ruth Spring, Marion Grow, Pauline Davis, Eleanor Milligan, and her brothers, Charles Percy, Russell Jr., and Donald.

Special thanks go to Dorie’s personal angel, nurse, and friend, Sherry, for her loving, devoted care for Dorie. The family also would like to thank Dorie’s nurses, Teresa, Becky, and Donna, and the nurses and staff of the Hospice of the Sacred Heart for their compassionate care for Dorie.

The family will receive relatives and friends on Saturday, October 31, from 10 to 11 a.m. at Harding-Litwin Funeral Home at 123 W. Tioga St, Tunkhannock, PA 18657, with a memorial service at 11 a.m. by the Rev. John Shaffer and Pastor Robin Fillmore. The interment will follow at Sunnyside Cemetery, Tunkhannock.

Memorial contributions may be made to the Hospice of the Sacred Heart, 600 Baltimore Drive, Wilkes-Barre, PA 18702