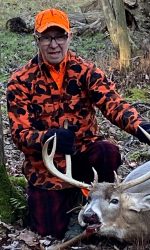 Edward G. Morgan, 73, of Lake Carey passed away at his home on October 23, 2021 with his daughter by his side. Born in Kingston on November 10, 1947, he was the son of the late John and Dorothy (Jackson) Morgan. Ed enjoyed his life at the lake with his partner of over 10 years, Barbara Philpotts, and his beloved cat Eppie.
Early in his career, Ed served in the West Virginia Air National Guard and as a Reserve of the Air Force. He was assigned to the 167th Consolidated Aircraft Maintenance Squadron and was honorably discharged at the expiration of his term of service. Ed later devoted himself to Procter and Gamble where he retired after 26 years of service.
Ed enjoyed many years fishing the lake he lived on, going for boat rides, and catching frogs and turtles. He was an avid hunter who had not missed the first day of buck season since he was 9 years old. Often referring to himself as “The Deer Hunter Extraordinaire,” Ed never shied away from breaking out the hunting albums to show off his shots.
He was meticulous about his yard work, loved rides in the country looking for wildlife, enjoyed watching the Sopranos, Sons of Anarchy, Yellowstone, Empire, and The Walking Dead, but chances were that he would be cracking up while watching Ridiculousness when you walked in the house. Ed was always up for a prank. Whether using his fake rattlesnake head or plastic poop, he always found a way to make you laugh. Above all else, Ed was a family man who loved his family fiercely.
In addition to his parents, Ed is preceded in death by his older sister who was born sleeping; Baby Morgan, his younger sisters; Dorothy Jane Garzilli and Cindy Lee Nye, and his nephew; Charles Gilbert Nye.
He is survived by his children; Shane Morgan and Lenore Morgan, grandchildren; Kaitlin Carey, Ashley Morgan, and Chelsea Morgan, a nephew and multiple nieces.
Funeral service will be private at the convenience of the family.