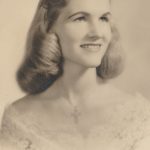 Eleanor was a 1958 graduate of St. Catharine Academy, Bronx, NY.

After graduation worked her way up to Assistant Branch manager at Chase Manhattan Bank.

In 1974 moved to Wyalusing, PA to start a family in the area her then husband grew up in.

Awarded Public Education Partners and Promoters award 1986-1988, she was very involved when it came to her children’s early education.

Eleanor was a  member of the choir at St. Marys of the Assumption Church in Wyalusing  also in her earlier years taught kindergarten bible study at the church and volunteered her services at many church functions helping out where she could.

Eleanor was a member of Tunkhannock decorative painting club  also Dushore endless mountains painting club (2002-2005) also spent her time crocheting and many other crafts. She loved to give gifts home made.

Blessing Service will be Saturday at 10 am from Harding-Litwin Funeral Home 123 W. Tioga St. Tunkhannock with Father Joseph J. Manarchuck officiating. Friends may call at the funeral home Saturday 9 to 10am.  For online condolences or directions visit www.aplitwinfuneralhomes.com