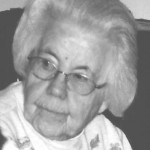 Born in Mehoopany on March 1, 1919, she was the daughter of the late William O and Pearl Smith Place.

She was a 1937 graduate of Mehoopany High School and a 1938 graduate of Tunkhannock High School.  She worked in the dress factory in Tunkhannock and as a checker at Charles Bros, Firestiens, and Bricks Markets.  She was a member of the Eatonville United Methodist Church and church treasurer for many years.  Her activities included quilting, gardening, RV camping with Good Sam Club, fishing, baking and more quilting.

She was preceded in death by her infant daughter Beverly, husband of 54 years Lloyd Kingston, Sr: sisters Alice Shoemaker and Dorothy Burgess,  and brother Warren Place.

Funeral services will be held at 11am Friday Jan. 27th from the Eatonville United Methodist Church with Reverend Betty Riley officiating.  Interment will be at Sunnyside Cemetery, Tunkhannock, PA.  Family will receive friends at church from 10 am until the time of the service at 11 am.

In lieu of flowers memorial contributions may be made to the charity of your choice.