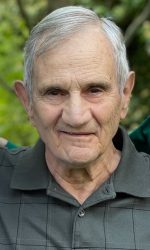 Share Print
Frank H. Scango, 85, of Tunkhannock passed away at his home on Dec. 28th.  He was born on July 6, 1937 in Throop, Pa and he was the son of the late Frank A., Sr. and the late former Yolanda G. Mayo.  He was married to the late Irene S. Scango who passed in 2017.  Frank was  a member of the last graduating class of Factoryville Borough-Clinton Township Joint High School, class of 1954.

Frank loved gardening, fishing, target shooting, and spending time with his children and grandchildren. He loved watching movies with his three cats and being at his home and spending time with his wonderful neighbors, Paul and Zita, Greg, and the owners and employees of Epicurian Delight. He would often enjoy visits with his brother Mark, and his best friend Davey-boy. His daughters are grateful to them, and to the other friends that became his family, who made time to spend with him since the passing of his wife.