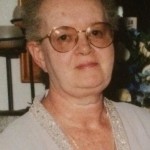 Gail A. Howells, 70, of Tunkhannock passed away at her home surrounded by
her family.   She was born in Scranton on April 4, 1944, the daughter of
the late Matthew and Winifred Mackie Soulsby.  Gail married Fred Howells on
Aug. 10th, 1961, and they spent 54 enjoyable years together.
Gail enjoyed cooking and spending time with her family, especially her
grandchildren.
In addition to her parents, Gail is preceded in death by a son, Fred Jr.
In addition to her husband Fred, she is survived by her five children:
James and wife Linda Howells of  Newton Ransom, Jeffrey and wife Wendy
Howells of Tunkhannock, Carol and husband Frank Milani of Scranton, Susan
Howells of Tunkhannock, and David and wife Danielle Howells of
Centermoreland.  Eight grandchildren: Jennifer Davenport and Fiancé Wyatt
of Laceyville, Stephen Howells of Scranton, Kenneth Davenport of Scranton,
Jaime and husband Alec Senefonte of Waverly, Kaitlyn Mikulka of
Tunkhannock, Austin Winters of Centermoreland, Devon Mikulka of
Tunkhannock, and Gavin Howells of Centermoreland.  Also a sister, Barbara
Dale of Fort Worth Texas, and many neices and nephews.
Funeral services will be private at the convenience of the family.
Memorial contributions may be made in Gail’s honor to the American Cancer
Society 712 South Keyser Avenue, Taylor, PA 18517