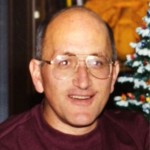 MCCONAGHY, Gary Newill, age 60, passed away on February 2, 2015 at his home in Nicholson, PA. Gary was much loved and will be sorely missed by his family and friends who knew him as a wonderfully kind, caring person with a great sense of humor. Gary was a graduate of Sun Valley High School, in Aston, PA and served for four years in the U.S. Navy after graduation. He moved to the Scranton area in the late 1980’s and worked at Electric City Signs for many years.

He is survived by his mother, Helen Newill McConaghy Sanderson, his brother Jim McConaghy, his sister Betty Ann McConaghy-Roel, his brother-in-law Ron Roel, and his nephews Thomas and James Roel. Services will be held on Saturday at 2pm at Anthony P. Litwin Jr. Funeral Homes, Inc. 33 Reynolds St., Factoryville, PA with Pastor Kevin Thomas of the Nicholson Trinity Assembly of God Church officiating. Friends may call at the Funeral Home from 1pm until the time of the service. For directions or to send an on-line condolence please visit www.aplitwinfuneralhomes.com. Donations in lieu of flowers may be made in remembrance of Gary to the Trinity Assembly of God Church in Nicholson or the Scranton Counseling Center.