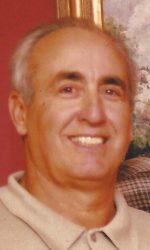 Share Print
Gerardo Marini, 76, of Tunkhannock passed away peacefully at the Wilkes-Barre General Hospital on Aug. 22, 2016.  He was born on Aug. 23, 1939 and was the son of the late Cesare Marini and Maria Pia Petragnani.

Gerardo was a 1957 graduate of Easton High School and then served in the US Navy.  He went on to serve in the Pennsylvania State Police for approx. 27 years during which time he earned his Associate’s Degree in Criminal Justice from King’s College.  After retiring from the state police, Gerardo held the position of Assistant Deputy Sheriff of Wyoming County for many years.  Gerardo enjoyed traveling, golfing, and watching his son, Marc, during his baseball career.

A mass of Christian burial will be held at 1pm Saturday from the Nativity BVM Catholic church at 99 E. Tioga St. Tunkhannock.  A visitation will be held from 11am until the time of the service at the church.  Interment will be private at the convenience of the family.  In lieu of flowers memorial contributions may be made to the American Cancer Fund PO Box 7262 Hillsborough, NJ  08844-7262.  For online condolence visit www.aplitwinfuneralhomes.com