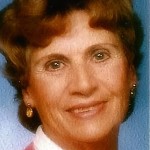 Gisela Osmun of La Plume died at the Geisinger CMC Hospital, Scranton on Feb. 4, 2016.
Born in Solingen, Germany, she was the daughter of the late Alfred and Elfrieda Klein, she came to the United States as the bride of the late Robert Osmun in 1948.
She and her husband operated M.T. Osmun and Son Agway in LaPlume for thirty-four years. The treasured years she spent with her husband mattered most to her in life. They created lasting memories that could only come from the love both had for each other.
She was a member of the Factoryville United Methodist Church, and she was active in the order of the Eastern Star and the American Field Service, where she hosted a foreign exchange student from Iceland.
She was a warm, caring and compassionate person, always helping others. She enjoyed quilting with friends and neighbors, and was loved by all. The peoples whose lives she touched will miss her greatly.
She is survived by a daughter, Barbara Osmun, Gibson; two grandsons, Kenyon Schiavone and Martin Schiavone and wife Brooke, who were the love of her life; and four great-grandchildren.
Preceding her in death were three brothers Rudi, Heinz and Alfred.
Private services will be held at the convenient of the family. Memorial contributions may be made to the Griffin Pond Animal Shelter, 967 Griffin Pond Road, S. Abington Twp., Pa. 18411 or the Factoryville United Methodist Church, 162 College Ave. Factoryville, Pa. 18419
www.aplitwinfuneralhomes.com