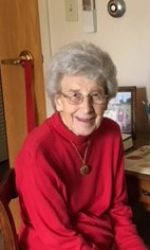 Hazel G. King, of Tunkhannock and formerly of Honesdale and Tidioute, died Sunday, November 15, 2020 at Wayne Woodlands Manor, Waymart. She had been a resident of the Methodist Manor for the past two years.

She was born May 8, 1925 in Honesdale the daughter of the late Levine H. and Mabel Blake Grimm.

She was preceded in death by her husband of 69 years Bernard King and an infant son George.

She was a member of the Tunkhannock United Methodist Church and will especially be remembered by others for her dedicated volunteer service at The Gardens.

Interment will be private at the convenience of the family. Memorial contributions may be made to the Tunkhannock United Methodist Church, PO Box 447, Tunkhannock PA 18657. To honor Hazel check on your neighbor, call someone who may be lonely, and feel gratitude for all you have been given. She will live on in every kind deed that is shared.