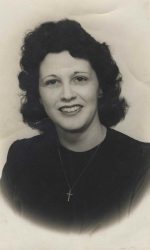 Helen Nichols, 96, of Tunkhannock passed away at The Gardens of Tunkhannock on April 29, 2022.  She was born on Sept. 9, 1925 in Tunkhannock and she was the daughter of the late Dewitt Rosengrant and the late former Daisey Oakley.  Helen was married to the late C. Duane Nichols.

In addition to her husband and parents she is preceded in death by her granddaughter Jill Baldo, sister Doris Wagner, brothers, Richard Rosengrant and Dexter Rosengrant.

Funeral services will be held Monday May 2nd at 7pm from the Harding-Litwin Funeral Home 123 W. Tioga St. Tunkhannock.  A viewing will be held from 5-7pm at the funeral home.  Interment will be private at Sunnyside Cemetery.  For online condolences or directions visit.  The family would like to thank The Gardens of Tunkhannock and their staff for the compassionate care they gave to Helen. In lieu of flowers memorial contributions may be made to the Hospice of the Sacred Heart 53 Glenmaura National Boulevard, Suite 120