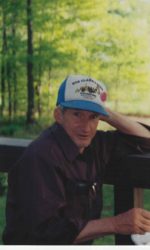 Ignatius “Iggy” Gavek, Jr. died on Jan. 3, 2023 at the Allied Hospice Wilkes-Barre.  He was born in Pringle, Pa. on May 20, 1929, and he was the son of the late Ignatz and the former Mary Blannard Gavek.  He was married to the late former Dorothy Felker who passed in 1991.  He was a graduate of the Beaumont School, and he was a US Army Veteran serving in the Korean War.  Iggy worked as a machinist for years at Atlas Chain in Pittston.

Iggy enjoyed working on his antique cars and going to car shows.  He loved spending time with his family.

In addition to his parents and wife he is preceded by brothers Lawrence Gavek, Joseph Gavek, Thomas Gavek, and a sister Marcella Campbell

Funeral services along with military honors will be held Monday Jan. 9th at 10am from the Harding-Litwin Funeral Home 123 W. Tioga St. Tunkhannock.  A viewing will be held Sunday Jan. 8th from 4-6pm at the funeral home.  Interment will follow at the Sunnyside Cemetery, Tunkhannock.  A special thanks to the Allied Hospice and staff for their care of Ignatius.  For online condolences or directions visit ww.aplitwinfuneralhomes.com.