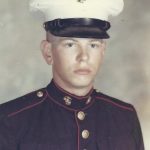 Irvin “Buddy” Harvey Jr. passed away peacefully at home after a courageous battle with cancer on the 4th of July, 2017.

Born in Tunkhannock March 1st, 1952, Buddy graduated from Tunkhannock Area High School, joined the Marine Corp. in 1970, and was a helicopter mechanic during the Vietnam War.

Buddy was an electrician who often worked out of town including his most memorable projects being West Point and Bethel Woods Center for the Arts and Woodstock Museum which took 3 years to complete.

He loved his country, race days, his little house and music.  Most important to him was family, friends and his beloved dog, Spud.

Buddy is preceded in death by his parents, Irvin Monroe Harvey Sr. and Eleanor “Deanie” Harvey, as well as his sister, Marianne Harvey.

Buddy was truly one of a kind.  He could make anybody smile.  He thrived on laughter and made friends wherever he went.  He was always full of life, energy, compassion, strength and joy.  He will be missed terribly by his family, friends and neighbors.

A memorial service will be held Friday at 7pm at the Harding-Litwin Funeral Home 123 W. Tioga St. Tunkhannock, Pa with a visitation from 6pm until the time of the service.

In lieu of flowers, memorial donations can be made to True Friends Animal Welfare Center in which Buddy was so proud of. Contributions in his name can be mailed to them at 16332 SR 706 Montrose, PA 18801 or online at truefriendsawc.com.