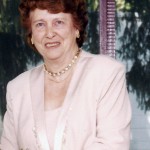 Jean Alice Furneaux, 90, of Factoryville died Friday Sept. 18, 2015 at Clarks Summit Senior Living. Jean was born in Factoryville on November 11, 1924, the daughter of the late Edward Jacob and Flossie Swartz Shupp.
Jean was a Rosie the Riveter, working on airplanes during WWII, a Mom, a realtor, and also had her beautician license. She was always cutting someone’s hair or giving someone a perm. Jean was active in 4-H clubs as a leader with all of her children. She loved playing games like croquet and bocce ball and having picnics with family and friends in their family “camp grove”. She was a long-time member of their Card Club that met once a month to play all kinds of card games, and she loved teaching others how to play card games like Pinochle.
In 1947, she married her late husband Lewis “Barry” Furneaux who died on April 22, 2008 it would have been their 69 years anniversary on Tuesday 9/22/2015. They resided, worked, and raised a family in the Factoryville/Clinton Twp. Area. After a 20 year career in the poultry business, they forged a successful career as real estate brokers. They started their business in the late 70s and successfully ran Endless Realty until their retirement in 2000.
She is survived in death by her four children, Linda Brown and her late husband, Barry Brown of Atlanta, Ga.; Patricia Furneaux Brown and her husband, Frank Brown, of Tunkhannock; Judy Nast and her husband, Robert Nast, of Factoryville; and Colin Furneaux and wife Peggy Furneaux, of Factoryville. Her grandchildren and great-grandchildren were her pride and joy, and she spent countless hours baby-sitting and attending all of their varied events- games, concerts, piano recitals, horse shows, and banquets. She instilled in them a love for applesauce which she would make lots of during the fall apple season. She lovingly cared for all of her family by putting them first and cheering them on in all of their endeavors. She is also survived by eight grandchildren, J.R. Rosengrant, Kimberly Wenrich, Bill Miller, Stephanie (Nast) Hegge, Nick Brown, Amelia Furneaux, Aliza Furneaux and Jacob Furneaux; and six great-grandchildren, Chase, Connor, Christian, Gianna, Gage and Jaxon.
The funeral service will be Tuesday at 7 pm at the Anthony P. Litwin Funeral Home, 33 Reynolds St., Factoryville. Interment will be private at the Evergreen-Woodlawn Cemetery, Factoryville. Friends may call on Tuesday; from 4 to 7p.m. Directions or online condolences can be found at aplitwinfuneralhomes.com.
In lieu of flowers, the family suggests memorial contributions be sent to the Factoryville Fire Company or the Wyoming County Historical Society.