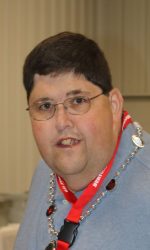 In lieu of flowers, Kevin’s family kindly requests memorial contributions be made in his honor to the Factoryville Fire Company; 412 College Ave.; Factoryville, PA 18419.

Kevin John Howard of Factoryville, PA., a proud father, devoted son, fireman extraordinaire, ardent supporter of life and community service in North Eastern Pennsylvania, beloved husband and friend, and a lover of silly one-line jokes who marched to the beat no one’s drum but his own, passed away on Monday evening, September 26, 2022, with his wife and sons by his side at Geisinger CMC, in Scranton, PA. He was 53. Born in Scranton on June 18, 1969, he was the son of Jerry and Carol Kulick Howard of Milford, DE. He married his wife, the former Doreen Hine, in Nov. of 1998.

Kevin was a 1987 graduate of Lackawanna Trail Junior – Senior High School who received an associates degree at Pennsylvania State University. He was a 33-year life member, trustee, and former Fire Chief at the Factoryville Fire Company where he was their Assistant Fire Chief at the time of his passing. In an emergency services career that spanned 37 years, he was also a member of Fleetville Fire Company, a State Fire Instructor with Bucks County Community College State Fire Academy, a PA Dept. of Health Instructor, a Lackawanna County dispatcher and E.M.A Deputy Director, and also worked at Lackawanna County Public Safety, Lackawanna County 911, Task Force 1, Inc., and was a former EMS preparedness Coordinator at Emergency Medical Services of NEPA.

In lieu of flowers, Kevin’s family kindly requests memorial contributions be made in his honor to the Factoryville Fire Company; 412 College Ave.; Factoryville, PA 18419.