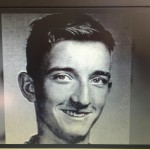 Louis Guy Parrish, 76, of Hartford passed away at the Golden Living Center under the care of the Hospice of the Sacred Heart on March 29, 2015. He was born Aug. 5, 1938 in Scranton, Pa. the son of the late Floyd and Gertrude Tisdale Parrish.

Louis Was a construction worker by trade for Roy Piper construction and he enjoyed farming and having a cold beverage with friends.

He was the grandson of the late Louis and Jessie Shefler Parrish.

He is survived by a sisters June Parrish Sherwood of Meshoppen, and Loretta Parrish Dilmore of Lemon. Sons; Lewis Sherman and wife Maryann of Newton Ransom, Guy and wife Karen Hayes Parrish of South Montrose, and Floyd and wife Beth Armstrong Parrish, of South Montrose. Several Nieces, Nephews, and grandchildren.

The family has donated Louis to science to help fight the battle against cancer.

Services will private at the convenience of the family.