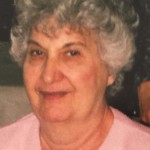 Lucille Matalavy, 90, of Richlandtown, formerly of Osterhout, PA, passed away on Saturday, January 31st at Phoebe Richland Health Care center in Richlandtown. She was born in Throop on June 3rd 1924, the daughter of the late Frank and Amelia Mason Gallo. Her husband was the late Bernard E. Matalavy who died in 1992.She was a graduate of Benton High School and went to Cosmetology School. After her Beautician training she worked as a manicurist before getting married. She l…oved spending time with family and friends, and going to church activities. She enjoyed being a homemaker, raising her children, and helping with the grandchildren. She always enjoyed listening and dancing to lively music from the 1940’s and 1950’s.In addition to her parents, Lucille is preceded in death by her brother Joseph Gallo, and sisters Rose Jakubos, Amelia Dohonich, Joan Perry, Frances Gallo, and a son Donald Matalavy.She is survived by a daughter Marilyn Christensen and her husband G. Chris of Perkasie, son Kenneth Matalavy of Lake Winola, sisters June and Richard McGarity of Fort Myers, Shirley and Ronald Kirlin of Nicholson, brothers Frank Gallo, Jr. of Peckville, John and Muriel Gallo of Fleetville, and Gerald and Sharon Gallo of Peckville, 6 grandchildren, 3 great grandchildren, and many nieces and nephews.Funeral service will be held at 11am from the Anthony P. Litwin, Jr, Funeral Homes 33 Reynolds St. Factoryville Tuesday Feb. 3rd. Friends may call from 9am until the time of the service. Interment to follow at the St. Josephs Cemetery Scott Twp. For directions or online condolences visit www.aplitwinfuneralhomes.com