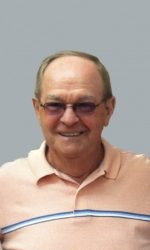 Malcolm F. Eyet, 86, of Falls, passed away peacefully at home early Friday morning, November 11, 2022, after a brief battle with cancer.

He was born July 13, 1936, to the late Archie and Iona Phoenix Eyet. He was a lifetime resident of Falls.

He was a graduate of Mill City High School, and following graduation, he joined the United States Army and served in Korea during the Korean War. He went onto work at General Motors in Linden, NJ for over 30 years. If he wasn’t playing a round of golf at the Emanon Country Club, he could probably be found on his lawnmower, tending to his flowers, or enjoying a bowl of ice cream. He loved the outdoors, and while he enjoyed hunting, his favorite part was spending time with family and friends around the kitchen table.

Mac is survived by sisters, Doris Willets and Margaret Sohns, and many nieces and nephews.

Funeral services will be private at the convenience of the family.
For online condolences visit www.aplitwinfuneralhomes.com