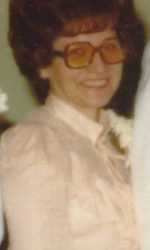 Share Print
Marion E. Burgess Anderson, 90, of Mehoopany passed away at the Geisinger Wyoming Valley Hospital on Sept. 22, 2021.  She was born in Tunkhannock on July 15, 1931 and she was the daughter of the late Louis H. Burgess, Sr. and the late former Verna Dymond.  She was married for 70 years to the late Edward Y. Anderson, Sr. who passed away in 2003.

Marion was of the Baptist faith, and she sold Avon products throughout the community for 30 years.  She enjoyed baking, watching game shows, cooking, caring for the elderly and the mentally challenged, long car rides, and talking on the phone.

In addition to her parents and husband she is preceded in death by sons; Edward Anderson, Jr. (2017), Terry Anderson, Sr (2013), and great grandson Brendan Anderson (2005), sisters; Eleanor Kinne, Ester Carey, and Loretta Adams.

A graveside service will be held on Monday Sept. 27th at 11am at the Union Hill Cemetery (Grist Flat Road Mehoopany) with Pastor Gary Myers of the Biblical Baptist Church of Meshoppen officiating.  For online condolences or directions visit www.aplitwinfuneralhomes.com