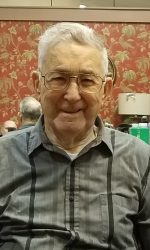 Mark Gardner McCain, 95, of Tunkhannock passed away at his home on Jan. 5, 2020. He was born in Tunkhannock on Feb. 17, 1924, and he was the son of the late Scott and Emma Lyman McCain. Mark was a graduate of the Tunkhannock High School and was Married to the late Mary Jane Mccain who passed away in 2004.
Mark started Mccain Gas and Electric on Rt. 6 Tunkhannock and his son Lloyd still operates it today. Mark was a devoted Christian and was a member at the Pilgrim Holiness Church. He was also the head of the sheep department at the Wyoming County Fair and a member of the Gideons.
In addition to his wife and parents Mark is preceded in death by a sister Marion McCain and brothers Lyman, Richard, Walter, Paul, and David McCain.
He is survived by his sons; Philip Mccain of FL, Lloyd McCain of Tunkhannock, grandson; Austin and wife Aisha, and granddaughter Harley and husband Matthew Miller.
Funeral services will be private at the convenience of the family. Interment will be at the Sunnyside Cemetery. Memorial contributions may be made to the Pilgrim Holiness Church 102 West St, Tunkhannock, PA 18657. For online condolences or directions visit www.aplitwinfuneralhomes.com