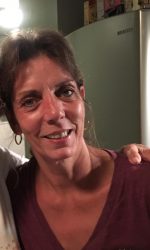 Mary Teresa Yuhas, 55, of Mill City, died Sunday. She and her husband, Joseph Robert Yuhas, had been married since 1982.

Born in Toms River, N.J., on Aug. 8, 1962, daughter of the late Eugene McGuire and Mary Coolbaugh, she was a 1980 graduate of the Tunkhannock Area High School.

Mary treasured her family and enjoyed spending time surrounded by the important people in her life.

She was also preceded in death by her sister, Kathy McGuire; and brothers, Michael and Charles McGuire.

A memorial service will be held Wednesday at 1 p.m. in the Harding-Litwin Funeral Home, 123 W. Tioga St., Tunkhannock, given by her brother, Gene McGuire.

Friends may pay their respects Wednesday from 11 a.m. until the memorial service begins. In lieu of flowers, memorial contributions may be made to the American Cancer Society, P.O. Box 22478, Oklahoma City, OK 73123. For online condolences or directions, visit www.aplitwinfuneralhomes.com