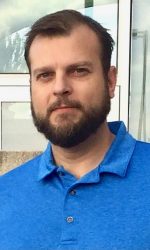 Private Graveside Service at Shoemaker Cemetery, Dalton with the Rev. Arbogaste Satoun officiating. A Celebration of Life Service will be held later in Dover, DE

Matthew Carl Schur, 45, of Dalton died at Regional Hospital of Scranton on March 9, 2021. Born in Dover Delaware on Sept. 16, 1975; the son of Daniel Schur of Dover, DE and Teresa and Scott Singley of Lititz, PA.

Matt grew up in Delaware and was an athlete throughout high school.  He was a talented tennis player and soccer goalie. Matt received his bachelor’s degree in Agriculture and Soil Science from the University of Delaware. He went on to be a Fresh produce broker serving the Northeastern Pennsylvania to Delaware communities. He met his best friend and wife Melanie Mroz in Philadelphia in 1997.  They were married on Jan. 8, 2000 in Hatboro, PA.  He enjoyed gardening, snowboarding, and music especially listening to his vinyl record collection. Most importantly he loved his family. His favorite thing to do was just being at home with them and their occasional vacations to the beach.

He was preceded in death by his maternal grandmother Grace Sipple in 2020 and his uncle Michael Sipple in 2015.

Surviving beside his parents and wife, are his 3 children.  Son Ryan Schur serving our country in the Navy, daughter Samantha Schur attending Penn State University, and son Gregg Schur currently attending LTHS and will be attending Scranton Prep in the Fall 2021.  He is also survived by his grandfather, John Sipple, Uncle Jack Sipple and his wife Terry of Dover, DE

Private Graveside Service at Shoemaker Cemetery, Dalton with the Rev. Arbogaste Satoun officiating. A Celebration of Life Service will be held later in Dover, DE