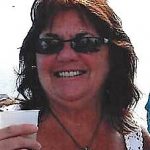 A Memorial Mass will be on Thursday Aug. 31 at 9am from Mary Mother of God Parish at Holy Rosary Church 316 William Street, Scranton with Father Cyril D. Edwards officiating.

She loved to travel and spend time with family and friends. She worked as a waitress 21 years at Tom and Jerry’s restaurant, Scranton and 12 years at Gin’s Tavern, Factoryville.

Maureen passed away after a courageous twelve month battle with cancer. The family would like to thank all of her many doctors and a special thanks to Hospice of the Sacred Heart for the wonderful care and compassion they gave her during her time of need.

Preceded in death by her son David; a sister Mary Ann Skiscim and a grandson Michael Patrick Jones.