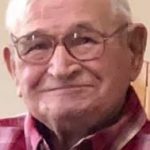 Michael John Wiernusz, 91, of Tunkhannock passed away at his home surrounded by his family.  Mike was born in Wilkes-Barre on Jan. 22, 1929 and he was the son of the late Michael A. and Franciszka Rokosz Wiernusz.  Michael married the former Jane Ann Lane on Nov. 19th 1951 and they were married for 68 years.   Mike was employed at the Local 13 as a boilermaker for 50 years.  Michael was a member of the Nativity BVM.

In addition to his parents he is preceded in death by three brothers and three sisters.

A mass of Christian burial will be held on Sat. at 10am from the Nativity BVM Catholic Church 99 E. Tioga St. Tunkhannock. A viewing will be held Friday from 5-8pm at the Harding-Litwin Funeral Home 123 W. Tioga St. Tunkhannock. Interment will be at the Mount Carmel Cemetery Tunkhannock.  In lieu of flowers memorial contributions may be made to the https://www.stjude.org/donate/donate-to-st-jude.html?sc_icid=header-btn-donate-now.  For online condolences or directions visit www.aplitwinfuneralhomes.com