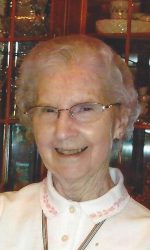 Mildred was a graduate of the Tunkhannock High School and enjoyed gardening, traveling, and reading.  She especially enjoyed driving friends on leisure trips and baking pies.  She was a member of the Eatonville United Methodist Church, Forkston Grange, and Tunkhannock Women’s Club.

In addition to her husband and parents Mildred is preceded in death by her sister Ottie Goodwin.  She is survived by her daughter Donna F. and husband Fred Harding, and a son Randy G. and wife Traci Giberson, grandchildren; Scott G. Harding and wife Christina, Faye M. Ziegler and her husband Kyle, Ryan Giberson, and Garret Giberson, great grandchildren; Alexis and Larissa Harding, and many nieces and nephews.

Funeral services will be held Saturday at 10am from the Harding-Litwin Funeral Home 123 W. Tioga St. Tunkhannock, with Rev. Betty Reilly of the Eatonville United Methodist Church Officiating.  Interment will follow at the Sunnyside Cemetery.  Friends may pay their respects on Friday between 6-8pm at the funeral home.  In Lieu of flowers memorial contributions may be made to the Eatonville United Methodist Church 44 Church Rd. Tunkhannock, Pa. 18657