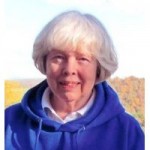 Nancy died during heart surgery in Kalispell, MT on December 12th, 2013 just two weeks prior to her 77th birthday on Christmas Day. She was the oldest of three children born to Dean and Marian Brooks of Springville, PA who predeceased her. Nancy was raised on a dairy farm near Lymanville and went on to study nursing at Wilson General Hospital in Johnson City, NY. A graduate of the Springville High School in 1954, she was active in chorus, former “minstrel” shows, and played forward in basketball “much better than I did” according to her good friend, Barbara Avery, who Nancy taught to drive a jeep. She participated in school trips to NYC and Luray Caverns and, according to classmate, Calvin Smales, “We all loved her.” Nancy was also active in the Methodist Youth Fellowship (MYF) and the local 4-H and enjoyed showing Maridean Farm Guernseys at Harford and NEPA fairs. In 1957 she married Larry Hulslander and soon after his graduation from Penn State, they moved to Glide, OR. Larry’s work with the US Forest Service later would take them to Burns, OR, Entiat, WA and Fortine, MT. Nancy completed her nursing career at Mountain View Manor in Eureka, MT prior to their retirement in Columbia Falls, MT where she continued to enjoy playing golf, flower gardening and singing in the community choir. She enjoyed being a “grandma” and was a stalwart supporter of her grandchildren’s sports prowess in ice hockey, football and basketball. “It was such a joy for us to live near our two grandchildren” she wrote in June of ’13. She is survived by her husband of 56 years and their three children, Mark Hulslander and Susan Hulslander of Kalispell, MT and Eric Hulslander of Boise, ID and two grandchildren, Taylor and McKenna Hulslander. Her brother, Jim Brooks, and his wife Nancy live in Mehoopany, PA. Nancy leaves a great void in her families—East and West—and will be especially missed at this year’s 60th HS reunion and as the Hulslander family reunites this summer in MT. There will be a memorial service for family and friends on Saturday, June 7th at 2 PM at the Lymanville Community Church conducted by her brother-in-law, Mac Hulslander. At her request, her ashes will be buried in the family plot in Lynn, PA shortly following. Memorial gifts may be made to the American Diabetes Association in her honor.