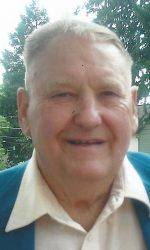 Norman Harding, 85, of Tunkhannock passed away Nov. 22, 2018 at The Gardens of Tunkhannock.  He was born in Tunkhannock on April 21, 1933 and he was the son of the late Earl and Stella Skoronski  Harding.  He was married for 48 years to the late former Beverly Remakis who died in 2005.   Norm was employed as a hard-working lineman for Penelec for 38 years.

Norm enjoyed all aspects of farming and  was an avid outdoorsman.  He enjoyed hunting, fishing, sports and especially watching his grandchildren during their sporting events.   Norman was a volunteer at the Triton Hose Company for many years and hung Christmas lights around Tunkhannock.  He was a faithful member of the Nativity BVM Catholic Church for decades and volunteered at the local Little League.

In addition to his wife and parents Norm is preceded in death by a daughter Joyce Harding and a sister Dorothy Shaffer.

A mass of Christian burial will be held on Tuesday at 11am from the Nativity BVM Catholic Church 99 E. Tioga St. Tunkhannock.  A visitation will be held Tuesday at the Harding-Litwin Funeral Home 123 W. Tioga St.Tunkhannock from 9 until 10:30am.  Following the visitation friends and family are asked to go directly to church.  Interment will be private at the convenience of the family.  The family would like to thank the Staff at The Gardens of Tunkhannock for their care and compassion for Norm.  In lieu of flowers memorial contribution may be made to the Triton Hose Company 116 W. Tioga St. Tunkhannock, Pa. 18657.  For more information visit www.aplitwinfuneralhomes.com