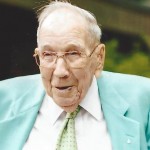 Born in the Rosengrant section of Eaton Township, son of the late Hubbard and Alice Luce Miner.

Army Veteran of WWII serving from May 20, 1941 till Dec. 13, 1945 Ike attained the rank of Sargent. He was a member and past Commander of the Dennis Strong American Legion Post 457, Tunkhannock. A member of Temple Lodge 268 F.& A.M., and a member of the NRA. Ike was a Charter and Life member of the Tunkhannock Beagle Club. He was formerly employed at Bendix Corp. in South Montrose. He was a member Eatonville United Methodist Church.

Funeral services will be Thursday at 10 am from Harding-Litwin Funeral Home, 123 W. Tioga St. Tunkhannock, with the Rev. Betty Reilly of Eatonville United Methodist Church officiating. Friends may call at the funeral home on Wednesday from 5 to 8pm