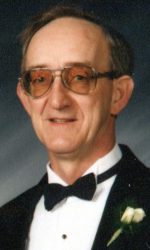 Paul’s life revolved around service above all things. He was a proud Air Force veteran where he served as crew chief for the F-4 Phantom during the Vietnam War in Okinawa, Japan. He continued his commitment to service when he joined St. Paul’s Lutheran church in Tunkhannock, Pa where he served as an elder and played an instrumental role in building the church that stands today. Whether he was reading scripture to residents at local retirement homes or providing assistance to fellow parishioners’ in their time of need, Paul lived to serve others.

Paul will be remembered as a man of character, love and kindness, and will be dearly missed by family and friends.

The family asks you to join in the celebration of his life with his viewing Friday March 22nd 5pm to 7pm at Harding-Litwin Funeral Home 123 W. Tioga St. Tunkhannock, Pa. Saturday we will continue the celebration at 10am at the St. Paul’s Lutheran Church 7652 SR 6W, Tunkhannock, Pa with the service concluding at Sunnyside Cemetery. For online condolences or directions visit www.aplitwinfuneralhomes.com