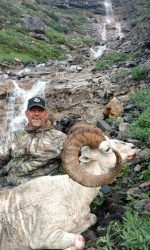 David graduated from Lackawanna Trail High School in 1986. He went on to play football at WIlkes University where he received a bachelor’s degree in Accounting. After graduating college, he joined the Army Reserves. He was a co-owner and operator of Naniewicz and Patterson Excavating and Paving, where he worked daily with his close friends Dave Naniewicz and Joe “Goodie” Good. His love of hunting was nurtured by his mother. He was an active member of the Factoryville Sportsman Club and traveled the world hunting big game. He enjoyed coaching his children in athletics and was very involved in many of their activities, hoping to pass on his passion to his own children.

Dave had a great sense of humor, a booming voice, and his laughter was contagious. He was the most honest man you could ever meet. He was a devoted son, husband, and father and loved his family deeply.

Along with his mother, Dave is survived by his wife, Heidi Schneider Patterson, and his three sons, Cole, Hunter, And Cooper. Also surviving are two sisters; Robin, Florida, Susan Gumble, West Nicholson, and many nieces and nephews. The man Dave always looked up to as a father figure was Mark Vanko.

He was preceded in death by his father and his brother, Matthew.

In lieu of flowers, memorial contributions may be made to Factoryville Sportsmen’s Club, 124 Gun Club Road, Factoryville, PA 18419