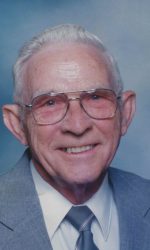 Ralph E. Anderson, 88, of Tunkhannock passed away at his home on Sept. 5, 2021.  He was born in Tunkhannock on Nov. 9, 1932, and he was the son of the late Miles and Beulah VanDeMark Anderson.  Ralph was a graduate of the Tunkhannock High school and was married to Joan E. Tewksbury Anderson for 66 years.

After high school Ralph joined the Army and served in the Korean War.  Ralph was a hunter and he enjoyed everything about it.  He was an avid outdoorsman, and he was an instructor for hunters safety for over 35 years.  Ralph was a deacon over 30 years for the Eaton Baptist Church.  He was a postmaster for 30 years in Tunkhannock, and delivered flowers for the Mayflower for many years.  He also worked for Sam Harding’s funeral home.

In addition to his parents, he is preceded in death by brothers, Nelson, Robert, Edward, Roy, John, and Miles and sisters, Anna and Emma Anderson, Naomi Wilsey, Ruth Hartman, Beulah Mae Barron, and Lois Button.

Funeral services will be held on Friday Sept. 10th at 11am from the Harding-Litwin Funeral Home 123 W. Tioga St. Tunkhannock, with Pastor Brian Hill and Dr. Guy Rathmell officiating.

A viewing will be held at the funeral home Thursday Sept. 9th from 4-7pm.

Memorial contributions may be made to the Eaton Baptist Church, 820 Hunter Highway, Tunkhannock, PA 18657.

Interment will be at the Sunnyside Cemetery.