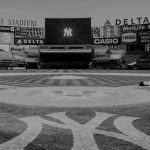 The children and our dad called her “Mo”, and the name just stuck. She was a huge Yankees and Knicks fan. She loved going to spring training. She is also survived by her sister Barbara Huff, and her brother Roy Dailey passed away a few years ago. Her children and grandchildren get their love of animals from her. She was a sucker for any stray cat. Mo was the best mother and grandmother any son, daughter, and grandchildren could be lucky enough to have.

She resided in her early years throughout high school in Tunkhannock, PA, and graduated Tunkhannock High School in 1950. After her marriage she relocated to Carteret, New Jersey where she resided and raised her family until her husband retired from IVIerk and Company in 1986. Upon retirement she and her husband often referred to as “Johnny” purchased a home in her beloved Northeastern, PA in Meshoppen, PA. She resided there with her husband, traveling and enjoying their retirement until her husband passed in November of 1998. Ramona continued to reside there, reading and spending time in the company of her friends and family before she returned to New Jersey to reside with her son.

She was found of returning often to Tunkhannock to visit with those friends and family Until health issues made that no longer possible.

Funeral services will be held on Sat. Feb. 8th 2020, at 5pm from the Harding – Litwin Funeral Home 123 W. Tioga St. Tunkhannock, Pa. 18657, with Pastor Scott Ryan of the Meshoppen Methodist Church officiating. Friends may call on the family from 3:00 p.m. to 5:00 p.m. For online condolences or direction visit www.aplitwinfuneralhomes.com