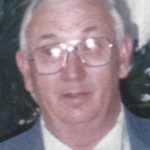 Share Print
Ray A. Swartz, 92, of Dalton, passed away at the C.M.C. hospital Tuesday morning Sept. 13, 2016 He was born October 8, 1923, in Mill City, Pa and he was the son of the late Jasper and Althea Ross Swartz.   Ray was married to the late former Virginia Minshall for 64 years and we was a graduate of the Falls-Overfield High School.

Ray was retired from P&G and enjoyed gardening, carpentry, and baking.   he is preceded in death by his parents his wife Virginia Swartz son Kenneth Swartz; and a sister Clara Mathers. He is survived by his son Ron Swartz, daughter Laura Wilbur, daughter-in-law Cherl Swartz, all of Dalton; three grandchildren:  Joshua, and Cody Swartz of Dalton also Jeremy Swartz and a great granddaughter Evelyn Swartz, of Scranton, His brothers Robert Swartz of Lake Winola, and Norman and wife Celia Swartz of Sayre, Pa. A memorial service will be held Thursday Sept. 22nd, at 6pm from the Harding-Litwin Funeral Home, 123 W. Tioga St., Tunkhannock, with Ernie King officiating. Friends may pay their respects from 5pm until the time of the service.