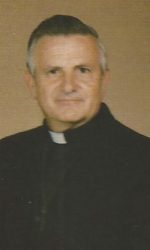 He graduated from Duryea High School in 1950. Following graduation he worked in Corning Glass Works.

Later returning to Duryea, he worked for the Globe Store in the T.V. Dept. This was when T.V.

became new in the area. Scranton needed towers on all the buildings to receive a signal and they

needed someone small to climb and connect them together. All eyes turn to the new guy!

Later he used his new craft to scale church steeples that needed painting.

In 1954 he attended Barrington College in Barrington, RI to study for the ministry.

In 1957 he married Mary Ann Arnold from the rock bound coast of Maine.

Everyone came to know them as a team.  It seemed to come natural to both of them. They never lost

their outstanding love and respect for each other.

In 1964 he completed Pastors School at Boston Theological University and in 1969 he was received into full membership in the Wyoming Annual Conference.

Rev. Herron was active in the youth of his churches taking them roller skating, swimming, hiking, and helping shut- ins, anything to keep them busy.

He was known for his love for his people. They knew he was only a telephone call away. Many tell of the

influence he had on their lives.

Some pastors have an “eye” for “bigger and better” appointments. Some have visions of power and

prestige. Others seek after larger arenas of responsibility and influence. For Rev. Herron, the goal has

always been quite clear and quite simple. He wanted to be a good pastor, who above all, would have it

said of him in the end, that he was a faithful pastor of Our Lord Jesus Christ; so he has been.

He is survived by his loving wife of 59 years, Mary A. Herron; two sons: John Daniel Herron of

He was preceded in death by his parents, one brother, and three sisters.

In lieu of flowers, memorials contributions can be made to your local church in Rev. Herron’s honor.